Woman Finds Worm In Lettuce Claims It Made Her Fat

Leila Jayne Daly bought lettuce from Sainbury's and it came with a little wiggly surprise.

She found a little worm crawling around her lettuce when she went to make herself a nice salad.

She was a little grossed out by the worm and decided to contact Sainsbury's about her discovery. To much surprise, she exaggerated the situation so badly that it turned into a hilarious viral post on Facebook. If that worm only knew the humor and laughs that it caused! 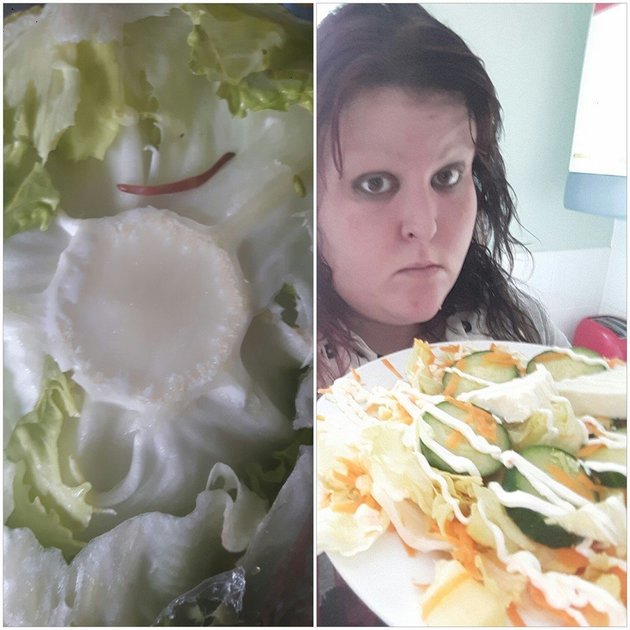 Dear Sainsbury's, it is with a sad heart that I write to inform you that your lettuce made me fat.

Today, starving, I entered my kitchen to make my lunch. Upon opening this fine lettuce, I noticed someone had already began eating it. Who, may you ask? Well it was this little worm.

As you can imagine I was absolutely horrified. My children started crying, my cats started headbutting the wall in shock, I soiled myself, my husband divorced me, it was complete madness.

I sat on the floor crying for a little over an hour. Until, puffy and red, I gave in and ate a burger. This was solely because I could not eat the lettuce purchased from you. Due to that burger, I instantly gained 12 stone. This is through no fault of my own and entirely due to the wormy lettuce.

What kind of establishment allows worms on food that comes from the ground? Do you want me to die? What if I get worms and they eat my insides and then my children will be without a mother? You should be ashamed of yourselves! Due to my failure as a person I have now become a fat prostitute. Again, this is solely your fault.

Hang your heads in shame. Fire all your staff. Close down your business. There is no other way.

Leila Jayne Daly started her complaint off saying that she was absolutely horrified about what she had found crawling around on her lettuce and that it had affected even her children and her cats.

She continued the complaint by saying her children had started crying and her cats had started headbutting the wall in shock before taking it further and saying that she had soiled herself and her husband divorced her.

As if that was not far enough, she then took it a step further by saying she ended up eating a burger instead of the healthy salad she had planned.

To over exaggerate that little bit further, she then said that by eating the burger she put on numerous pounds before telling the store chain to hang their heads in shame, fire all their staff, and cease trading.

The popular food chain, Sainbury's (popular in the UK) soon saw the humor in this and replied to Leila Jayne Daly with their own witty sense of humor.

Sainsbury's tells her that worms are easy pets to keep and that it was quite an achievement to gain 12 stone from one burger.

I will admit, that must have been one big burger to gain 12 stone! Either that or she was telling porkies and ate more than that burger.

Ross, as he goes by on social media, then said that she made a mean salad and that maybe she should look into a career at salad making.

Eventually they reached an agreement of her receiving a gift card for her troubles.

Finding a worm in your lettuce is kinda nasty, but writing a great viral Facebook post like this took a good sense of humor and that's well worth finding a worm.

If you found a worm in your lettuce, then would you complain in a funny or serious way?

Trump Patriotic Winter Beanies are IN! Get yours FREE!
love your country!

Should we impeach Ilhan Omar? Yes or No? / Is AOC mentally unstable? Sign off on it! / Should we demand Adam Schiff resign? Add your name!

We Need Your Help!

What is this, Gulag city?

Democrats do as they say, not as they do

Dersh is right. Opinions and feelings are not facts and only facts should be used for impeachment

Will Democrats destroy this? One Trump lawyer thinks so

This is why people are starting to dislike the mainstream media

Time to get those welfare costs down for America

Schiff wants Bolton to talk, but why didn't he get it before?

Trump is in the business of selling out venues, here's the latest

This is a good reason to agree with an MSNBC host

Elise Stefanik crushes Adam Schiff's over his major mess up

Trump hammers Schiff on Twitter, gives him what appears to be a warning

Will this make Ilhan Omar nervous?

Support your First Lady! Get a FREE Melania Coin!